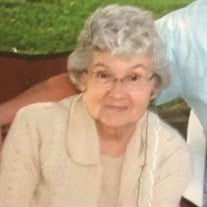 Anna Marie Wladyka (nee Martinchuck), loving wife, mother and grandmother passed away on March 22 at the age of 90. Anna was born on October 19, 1930 in Geneva, Ohio to Stefanina (Marunowski) & Trofim Martinchuk. She graduated from Geneva High School and went on to start her career at the Geneva Metal Wheel where she made wonderful memories that were some of her favorite to reminisce about later in life. On May 23, 1953 she married her sweetheart, John L. Wladyka Sr. and they raised two sons together, John and Jim. Though small in stature, her heart and work ethic were anything but. Anna truly loved people and the work she did each day. Several years after her husband founded Lenox Equipment Company, she joined the family business where she worked alongside her husband and two sons, helping to keep the company running like a well-oiled machine. While she loved her work, her true joy came from greeting the customers. She had an undeniable ability to make every person she met feel special. Anna’s late husband, her two sons and their wives, and her two grandchildren were her biggest priority and greatest joy. During her retirement, Anna spent many evenings in the bleachers cheering on her grandchildren at their games and remained their biggest cheerleader in life right up until her final day. She is survived by her two sons, John (wife Kateri) Wladyka and Jim (wife Denise) Wladyka of Jefferson and two grandchildren, John J. (wife Maria) Wladyka and Elizabeth “Beth” (husband Daniel) Nieser. She is preceded in death by her husband, parents, brother, Fred Martinchuck and sister, Mary Martinchuck. The family will hold a private family graveside service to honor her life. In lieu of flowers, donations can be made to Jefferson Emergency Rescue District, P.O. Box 294, Jefferson, Ohio 44047, or to First Congregational United Church of Christ in Andover, P.O. Box 177, Andover, OH 44003.

Anna Marie Wladyka (nee Martinchuck), loving wife, mother and grandmother passed away on March 22 at the age of 90. Anna was born on October 19, 1930 in Geneva, Ohio to Stefanina (Marunowski) & Trofim Martinchuk. She graduated from Geneva... View Obituary & Service Information

The family of Anna Marie Wladyka created this Life Tributes page to make it easy to share your memories.