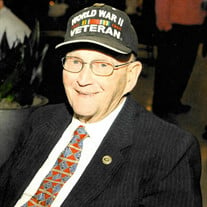 Clifford L. Harpst, 95, of Ashtabula, passed away January 10, 2022 at Ashtabula County Medical Center. He was born March 1, 1926 in Albion, PA, the son of the late Jesse C. and Frances L. (Harrington) Harpst. In 1943, he graduated from Albion High School and then served honorably in the US Army during World War II as a Radio Operator. After his military service, he married Rozella Ulan and together they shared a lifetime of love and memories until her passing in 2007. Clifford was a hard-working person and had careers in both retail and sales. His favorite job was the 11 years he spent working in sales for S&H Green Stamps. In his spare time, he was an active member of Saybrook United Methodist Church as a member of the choir & a Lay minister, he was a long time mason of the Relief Lodge in Pierpont, Ohio, Valley of Erie Scottish Rite, Zem Zem Shriners of Erie, PA. He was also Past President of the Albion Lions Club, served on the Albion Fair board and volunteered with CONTACT suicide help line. He loved to interact with people, especially drinking coffee at a local coffeeshop telling stories or just talking to people he met while traveling. He is survived by his children, Lynda (Brad) Terry, Coletta Bernauer, Jon (Dolly) Harpst, and Bill (Debbie) Harpst; grandchildren, Kira Lugo, Nathan Veshecco, and Jeremy (Amanda) Bernauer; 6 great-grandchildren; brother, Don (Linda) Harpst. Preceding him in death were his wife, Rozella (Ulan) Harpst; parents, Jesse C. and Frances L. (Harrington) Harpst; sister, Dorothy Swedrock; brother, Warren Harpst. A memorial visitation will be held on Sunday, January 16, 2022 from 2pm-4pm concluding with full military honors at Lake Erie Cremation and Funeral Services, 1500 Harpersfield Road, Geneva, Ohio. In lieu of flowers, contributions may be made to either Feed Our Vets Ashtabula, 433 Center Street, Ashtabula, OH 44004 or the Saybrook United Methodist Church, 7900 Depot Road, Ashtabula, OH 44004. www.LakeErieCrematory.com

Clifford L. Harpst, 95, of Ashtabula, passed away January 10, 2022 at Ashtabula County Medical Center. He was born March 1, 1926 in Albion, PA, the son of the late Jesse C. and Frances L. (Harrington) Harpst. In 1943, he graduated from Albion... View Obituary & Service Information

The family of Clifford Harpst created this Life Tributes page to make it easy to share your memories.