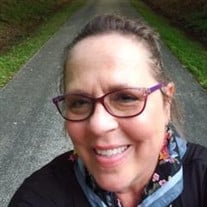 The world grew a little duller early Saturday morning, August 7, 2021 when Donna Francis, loving mother, wife, and human being died after an enduring battle with ovarian cancer. She was 57. Donna Francis was born to Fayetta and Alvin Nunley in Warren, Ohio on October 19, 1963. She was friendly and quick-witted; often regaling her friends and family with mundane stories told in such a way they were sidesplitting. She had a beautiful smile that lit up rooms like electricity, with a magnetic personality that many will miss. Donna loved dancing and music. She was a fountain of music trivia knowledge particularly rock, alternative, and over the years won several pairs of tickets to concerts off the radio. She loved the sunshine and being out in the warm weather. She and Scott Francis, her husband and partner since 2005, spent most of their free time riding their bikes on the metro-parks trails. In a typical summer they would easily clear 500 miles. She appreciated the spookier things, and was a horror movie buff as well as a big fan of celebrating Halloween. She died having lived the life she wanted, spending it surrounded by her adoring family. Despite an over twenty-year battle with rheumatoid arthritis and five years of ovarian cancer, Donna made the best of her time, choosing joy, laughter, and dancing. She will be missed greatly. She is survived by her husband Scott M. Francis, her former husband Russell S. Wood, with whom she had two children: Ryan S. Wood, and Cata M. Wood, her sister Cynthia Heath, her nieces Lisa Deering, Julie Szitas, nephew Lyle Heath, and stepson Justin P. Wood. She is preceded in death by her parents and one sister Rosetta White. A Celebration of Life will be planned for 2022. Details will be shared by the family.

The world grew a little duller early Saturday morning, August 7, 2021 when Donna Francis, loving mother, wife, and human being died after an enduring battle with ovarian cancer. She was 57. Donna Francis was born to Fayetta and Alvin Nunley... View Obituary & Service Information

The family of Donna C. Francis created this Life Tributes page to make it easy to share your memories.