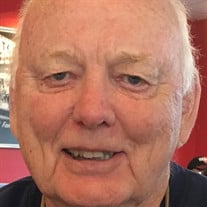 George Stevens Edge, 84, of Ashtabula, passed away Monday, January 10, 2022. He was born January 24, 1936 in Americus, GA, the son of the late John Simpson and Elizabeth (Stevens) Edge and his step-father, Inman A. Brannon, who raised him. After graduating from Americus High School he went on to graduate from Georgia Tech where he enrolled in ROTC. After graduating, he went on to serve honorably in the US Army. On January 20, 1963 he married Sarah “Sally” Powell at Ashtabula First Congregational Church and together they shared 47 years of love and memories before her passing on October 9, 2010. George was a hard-working person and began his career on the West Coast with the railroad, then went to work for the Lummus Corporation as a civil engineer in St. Croix, US Virgin Islands, and then the Hess Oil Company from 1967-1999. In his spare time, he was a proud member of the Republican Party, the Elks Club, and loved working with his tools building things and flying his flight simulator. He is survived by his children, George Edge II, and Samantha Edge; grandchildren, Steven Kasich, Clayton Kasich, and Cooper Kasich; great-grandchild, Gwen Kasich. Preceding him in death were his wife, Sarah “Sally” (Powell) Edge; sister, Elizabeth Longino (Betty Edge); and brother, John S. Edge. A Celebration of Life will be planned at a later date with burial in Evergreen Cemetery in Geneva, Ohio. Contributions can be made to Wounded Warrior Project, PO Box 758516, Topeka, KS 66675-8516. The family wishes to extend a special “Thank You” to all of his loving friends and neighbors. Lake Erie Cremation and Funeral Services, 1500 Harpersfield Road, Geneva, OH 44041 assisted the family with arrangements. www.LakeErieCrematory.com

George Stevens Edge, 84, of Ashtabula, passed away Monday, January 10, 2022. He was born January 24, 1936 in Americus, GA, the son of the late John Simpson and Elizabeth (Stevens) Edge and his step-father, Inman A. Brannon, who raised him.... View Obituary & Service Information

The family of George S. Edge created this Life Tributes page to make it easy to share your memories.