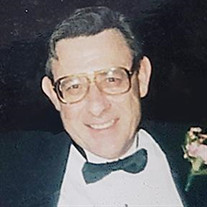 Retired Petty Officer First Class James "Jim" Robert Tritt died peacefully in Painesville, OH on Sunday, March 20, 2022 at the age of 85 after a lengthy illness. Jim had many overseas experiences in Turkey, Japan, Germany, Australia, and Vietnam as an honored US Navy veteran, serving proudly on five different aircraft carriers and ships for 20 years. We can only hope to honor his memory and continue to bring his experiences to life. On November 16, 1936, Jim was born in Youngstown, OH, to the late steelworker Frank Barton and homemaker Helen E (nee Clouser) Tritt. Growing up on a farm, Jim loved tending to the animals and playing sports, where he was later offered to join a traveling baseball team for Detroit. Instead, he joined the armed forces in 1956 after graduating from North High School. After retiring from the USS California (DLGN36), Jim worked at US Lighting Service in Willoughby as a Personnel Supervisor until his retirement in 1998. In his spare time, Jim loved working on DIY home improvement projects, listening to country music, playing golf, rooting for the Cleveland Indians and Baltimore Orioles, and grilling hamburgers and hotdogs outside. Jim is the proud father of sons, David Alan and Robert Dale, and his daughter, Cara Lynn. He is also a loving grandfather to his four grandchildren, Brenna Cailin, Caitlyn Victoria (Vee), Madison Mae, and Charlee-Sue. His granddaughters fondly remember their Opa during their visits and having special conversations with him as he drove them home from school when he lived in South Carolina. His sunny and fun-loving nature endeared old and new acquittances. Jim had a warm heart and could talk to anyone. Jim is survived by his sisters, Grace Elizabeth Dyce and Dorothy Pearl Wilson; and brother, Clement and is preceded in death by his brothers, Fred Manning, Harold David, Thomas Wayne, William L, and Richard Phillip; and sister, Ruth Eileen. Jim's recipe for livin' was as simple as the ABC's, he was a happy-go-lucky fellow, full of fun and fancy-free! A private Celebration of Life will be held at a later date. Donations in Jim's memory can be made to Hospice of the Western Reserve, 17876 St Clair Ave., Cleveland, OH 44110, or online at https://p2p.onecause.com/hwr/donate.

The family of James Robert Tritt created this Life Tributes page to make it easy to share your memories.