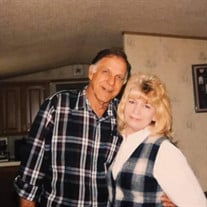 June Marie Chapman, age 70 of Jefferson Ohio, passed away Sunday January 17th, 2021. Born on September 12, 1950 to Robert and Betty (York) Ford in Chardon, Ohio. Married to Harold S. Chapman on May 10th, 1997. June was an avid reader, coffee drinker and lifelong Cleveland Browns and Ohio State Buckeyes fan. She was known to yell at the TV like she was on the sidelines when it came to football. She enjoyed going to the casino, playing cards and going to the beach to look for beach glass. She had an obnoxious amount of Chapstick on her person at all times. She loved her family and friends and enjoyed time spent with them. June was a mom and aunt to many nonbiological children, nieces, nephews, all of which she loved like they were her own. She is survived by her husband Harold S. Chapman, her children; Butch (Dee) Chapman of Salisbury, NC, Leanne (Wayne) Hanson of Dorset Ohio, Kevin White of Orwell Ohio, Jeffrey White of Carlisle PA, Diana ( Jason) White of Orwell Ohio, Sarah (Geoffrey) Phelps of Pierpont Ohio, and Megan (Jarrod) White of Jefferson Ohio. June is also survived by her loving grandchildren; Lucas, Dwayne, Wyatt, Olivia (Michael), Shayna (Michael), Spencer (Lesley), Trinity, Tagan, Alainna, Willow, Exzvior, Heaven, and her great-grandchildren; Max, Sophie, Owen, Oliver and Hadley. Her sister Beth (Bill) Schwab. June is preceded in death by her parents Robert and Betty Ford, her sister Pat, and her brothers Bobby and Cecil. June will be missed by so many. A special note to her three honorary girls; Jamie P., Laura R., and Brittany S., and honorary son Jimmy (Jen) L. Also a special mention to her very close friends Amy S., Donna H., Donna B., and Chrissy W. June also loved her grand-animals, Lil Sniffer Leo, Sampson, Tucker, and Paisley. A celebration of life will be planned for a future date. Lake Erie Cremation & Funeral Services assisted the family with arrangements, 1500 Harpersfield Rd., Geneva, OH 44041. 440-361-2273, www.lakeeriecrematory.com

The family of June Marie Chapman created this Life Tributes page to make it easy to share your memories.