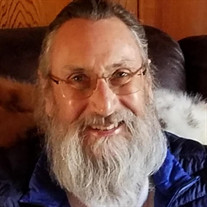 It is with great sadness that the family of Larry Dean Lockard of Geneva, Ohio, share the news of his passing. He fought long and hard, but through no fault of his own, he lost his battle against cancer on March 5, 2021. Larry was born in Buckhannon, West Virginia, in 1955, and his family moved to Portage County, Ohio, when he was a young child. Before enlisting in the Navy in 1979, Larry graduated from Rootstown High School in 1973. His first job was at the Record-Courier in Ravenna, Ohio, followed by stints at Ametek Lamb Electric and the Ohio Turnpike. During the eight years he served in the Navy, Larry attained the rank of Machinist’s Mate First Class, Engineering Laboratory Technician specialty. In 1988, he earned an Associate of Science degree through the College Afloat Program from the New York Board of Regents. Shore duty included training others at the S1C Nuclear Submarine Prototype at Windsor, Connecticut. Sea duty was spent aboard the nuclear submarine, USS M.G. Vallejo, Gold Crew, out of King’s Bay, Georgia. After separating from the Navy in 1987, Larry began a civilian career at local and distant nuclear power plants where he progressed from the position of Chemistry Technician to his last position as Fleet Oversight Supervisor at the Perry Nuclear Power Plant, with stops along the way including Radiation Protection Technical Skills Training Instructor. While in the Navy, Larry met and married his soul mate, the former Colleen Caracciolo of Kent, Ohio, who survives him. They met on a blind date, and it was love at first sight. Together they raised two children, Emily (Brian) O’Brien and Damon Lockard, both of Geneva, who also survive him, along with a special little grandson, Tristan O’Brien. Other survivors include his sister, Linda (Larry) Cook, of Ravenna, Ohio, and several aunts, uncles, and cousins. Larry’s parents, Shirley (Fisher) and James Lockard, both predeceased him. For many years, Larry enjoyed spending summer weekends at the Great Lakes Medieval Faire. Until recently, he also enjoyed keeping an impressive vegetable garden, but the thing Larry enjoyed most was sitting around a campfire in the backyard with anyone who wanted to join him and share a “wee dram” or two. Larry was the kind of guy who would do anything in his power to help a friend or colleague. His wisdom and strength will be missed by all who knew him. The family would like to thank all his caregivers from Hospice of the Western Reserve (they were terrific!), and a special thank you to Alex Bevan who provided comfort as only he can. Due to Covid-19 precautions, an immediate service will be private. An outdoor celebration of Larry’s life will be held at a later date. Arrangements are being handled by Lake Erie Cremation & Funeral Services, Geneva, Ohio. Please do not send flowers. Memorial contributions may be sent to Hospice of the Western Reserve, (hospicewr.org), 17876 St. Clair Avenue,Cleveland, OH 44110, or the Arbor Day Foundation, (arborday.org), 211 N. 12th Street, Lincoln, NE 68508 , or just plant a tree in his memory.

It is with great sadness that the family of Larry Dean Lockard of Geneva, Ohio, share the news of his passing. He fought long and hard, but through no fault of his own, he lost his battle against cancer on March 5, 2021. Larry was born in Buckhannon,... View Obituary & Service Information

The family of Larry Dean Lockard created this Life Tributes page to make it easy to share your memories.

It is with great sadness that the family of Larry Dean Lockard...