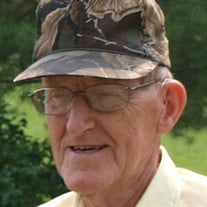 Melvin T. Cole age 91, passed away at home on February 5, 2022 from complications of Alzheimer’s. He was born November 29, 1930 in Alvon West Virginia to Melvin Arthur and Lillie Mae (Fifer) Cole. He married his wife Carol (Smith) in 1956 and together they made their home in Northeast Ohio. Melvin was proud of being a veteran. He served in the US Army during the Korean war, reaching the rank of Corporal. Melvin lived his life based in faith, commitment to family, and hard work – he tended to have little tolerance for those who did not share these same values. He was able to solve anything he encountered with the support of his loving wife, his grit, determination, creativity and a little bit of silicone. The word can’t did not exist in his vocabulary. These traits and values served him and his wife well as they owned and operated their businesses Cole’s Electric Service and Pools by Cole. Owning his own business allowed him to fulfill his greatest passion - helping others. He is survived by: his wife of 66 years, Carol (Smith) Cole; Siblings Evelyn, Starlena, and Clifford; Daughters Cindy (Pete) Stevenson and Sandra (Donnie) Pedro; Grandchildren Amanda (James) Ressel, Ashley Cole, Brittany Cole, Mariah Phillips, Desiree Cole and Deston Cole; Great Grandchildren Alex, Kirhianna, Khamden, Kaidyn, Kambree, Presley and Neveah. He was preceded in death by his parents, siblings Cloris, Junior, Della, Lantie, Shirley, Donnie, Milford, Willie, Janie, 2 brothers in infancy, and his son (Melvin) Doug Cole. Melvin’s family is deeply grateful for the wonderful care and support provided by the VA. The past two years could not have been possible without his home-based Erie VA care team Dawn, Julia, and Abby along with Libby from the Ashtabula VA office. Also, a special thank you goes out to Jessie, Linda and Rocket. A memorial service will be held Saturday, February 12, 2022, at 3:30pm at Lake Erie Cremation and Funeral Services, 1500 Harpersfield Road, Geneva, Ohio 44041. Visitation will be held from 2pm until the time of service. In lieu of flowers, memorial contributions can be made to the family, Veteran’s groups, or to the Hospice of Western Reserve. www.lakeeriecrematory.com

The family of Melvin T. Cole created this Life Tributes page to make it easy to share your memories.