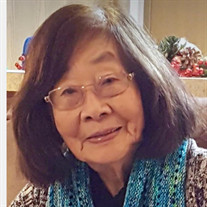 Nobuko Weeks (nee Hasegawa), of Ashtabula, age 88, passed away at her home surrounded by family on November 26th, 2020. Born on November 19th, 1932 in Tokyo, Japan to parents Fujio and Setsuko Hasegawa. Married on June 20th, 1974 to Francis William Weeks “Bill” in Honolulu, Hawaii. Nobuko earned her BA in English and American Literature from Rikkyo University in Tokyo. She spent many years as a Japanese language instructor at the American Embassy in Japan and was a Japanese language instructor at Punahou School in Honolulu, Hawaii. Nobuko also taught Japanese language at the University of Hawaii for 10 years and was proud to co-author a textbook to aid in teaching the Japanese language to English speaking students. She loved to travel, garden, watch NASCAR and she was an avid Ohio sports fan. Nobuko is survived by her step-daughters; Candice Keller (Robert) and Erin Fitch (Steve), her grandchildren; Jennifer Hershey, Evan Keller and Zak Keller, and her great grandchildren; Brittany Hershey, Brianna Hershey, Blake Hershey, Sidney Harding, Hudson Keller, Reese Keller, Katie Keller, Seth Keller, and Gavin Keller. She is preceded in death by her parents, her loving husband, her sister Keiko Hasegawa, and her grandson Jeremy Keller. A private family inurnment will take place at Edgewood Cemetery at a future date. Memorial donations in Nobuko’s name can be made to the Hospice of the Western Reserve, 1166 Lake Ave., Ashtabula, OH., 44004.

The family of Nobuko Weeks created this Life Tributes page to make it easy to share your memories.