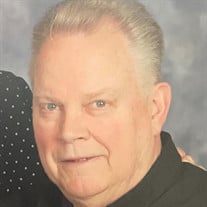 Philip Owen Shemkunas, age 79, of Trumbull Township, passed away peacefully with his wife by his side on July 7th, 2021 at Saybrook Landing Nursing Home. Philip was born April 18th, 1942 in Euclid, OH., to parents Margaret (Hurley) Shemkunas and Anthony Sherwin. He graduated from Euclid High School and went on to attend John Carroll University and graduated from Lake Erie College with an Engineering Degree. Philip worked hard throughout his life to provide for his family, he applied for and received several patents for his inventions, one being a printer that was featured in a German Magazine. Philip married his sweetheart, Barbara (Grinius) Shemkunas on Sept. 5th, 1980 at Thunder Hill Country Club in Madison, OH. Together they raised their families for 41 years. Philip was very proud to be a citizen of Trumbull Township, he was President of the Ruritans Club for several years and was also elected citizen of the year in 2016 by Trumbull Township. Philip loved to fish and hunt locally and throughout the U.S., he would also make a trip to Canada 3-4 times a year for some exceptional fishing and hunting. Philip was involved with the Methodist Church, but what was most important to him was his personal relationship with God. Philip is survived by his loving wife Barbara, his children; Michael (Ming) Shemkunas, Marcelle Shemkunas, Melanie (Rob) Fedele, and Ed Bauer. He is also survived by many loving grandchildren and great grandchildren, especially Chloe, Heaven, Abby and Colton. Philip is also survived by his sister, Sally (Gary) Shemkunas. He is preceded in death by his parents, his children; Mandy Shemkunas and Steve Bauer, and his sister Suzie Shemkunas. The family is planning a private Celebration of Life at a future date in the Fall. Memorial donations can be made to honor Philip’s life directly to Lake Erie Cremation & Funeral Services, 1500 Harpersfield Rd., Geneva, OH. 44041. 440-361-2273. www.lakeeriecrematory.com

The family of Philip Owen Shemkunas created this Life Tributes page to make it easy to share your memories.