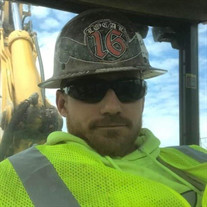 Ray Henderson passed away April 20, 2021 from injuries sustained in a motor vehicle accident. Born December 5, 1985 in Geneva, Ohio, Ray was down to earth and well liked by his peers. He would always go out of his way to say “hello” if he saw you and offer his help if it was needed. Ray played baseball and football in high school and continued baseball in summer league play after graduation in 2004. He enjoyed fishing, “working out” at the gym and the yearly, one day, shooting competition with Local 16 in Kentucky because, “the food is outstanding”! He also enjoyed working on older model trucks and cars with his Dad. He was currently in the process of building a 1966 Ford F-100. Ray also liked to attend car shows and occasionally spend the day at Thompson Raceway Park with his family. But most of all, his favorite thing to do was “hanging” with his girls, Aubri, 9, Emersyn, 4 and his wife, Megan, whom he married on July 15, 2011 in Geneva, Ohio. . He was a member of Local 16 Bricklayers and Allied Craftworkers, which he joined in 2006. He was proficient in stamping and coloring concrete proving himself by pouring patios, walkways and driveways for several friends and members of his family. Ray is survived by his Wife, Megan (Setele) Henderson of Geneva, Ohio. Daughters, Aubri Henderson, 9 and Emersyn Henderson, 4. Mother, Dianne Manthey of Geneva, Ohio. Father, Thomas Henderson (Cindy) of Madison, Ohio. Sister, Danielle Brenwald of Geneva, Ohio. Uncles, John Henderson of Thompson, Ohio and Dennis (Beth) Manthey of North Carolina. Aunts, Bonny Reed of Madison, Ohio, Jackie (Steve) Eubank of Perry, Ohio, Pam Shaw of Geneva, Ohio, Tammy (Brian) Hull of Florida and many cousins and extended family members. Also, former Step-Mother, Tracy Henderson of Geneva, Ohio. Ray was preceded in death by his Son, Joshua Henderson (infant), Aunt, Linda Bosworth of Thompson, Ohio. Uncle Danny Manthey. Paternal and Maternal A Celebration of Life will be held Saturday, April 24, 2021 from 1pm to 4pm at the Harpersfield Township Community Center, 5516 Cork Cold Springs Road, Geneva, Ohio. Lake Erie Cremation & Funeral Services assisted the family with arrangements. wwww.LakeErieCrematory.com

Ray Henderson passed away April 20, 2021 from injuries sustained in a motor vehicle accident. Born December 5, 1985 in Geneva, Ohio, Ray was down to earth and well liked by his peers. He would always go... View Obituary & Service Information

The family of Ray T. Henderson created this Life Tributes page to make it easy to share your memories.