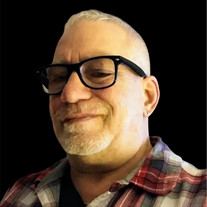 Robert “Bob” Atzemis, 60, formerly of Ashtabula, died unexpectedly January 16, 2022 at his home in Cleveland. He was born August 25, 1961 in Ashtabula, Ohio to the late Theodore J. and Jean May (Peters) Atzemis and graduated from Harbor High School in 1979. Bob had a lifelong passion for baking that began as a teenager in his Aunt and Uncle’s bakery (the Squire Shoppe Bakery). He spent many years in the bakery at Giant Eagle and was a pastry chef at II Venetian in Cleveland at the time of his death. He often joked he was the best baker in the family. He was an avid Cleveland sports fan especially the Cleveland Browns. He loved going to football and baseball games with his children Josh and Ashley. He enjoyed his first Browns training camp with his grandsons this past spring. Bob loved all kinds of music, particularly rock, and loved attending rock concerts. It was a love he shared with his daughter, Diana, and they bonded over attending concerts together. Bob never missed an election and would want me to remind everyone to vote, and return your shopping cart. He is survived by his children, Diana (Atzemis) Jankowski and her husband Matthew, Josh Atzemis, and Ashley Atzemis; sister, Michelle “Shelly” (Bud) Millick; grandchildren, Brody Jankowski and Cole Jankowski. Preceding him in death were his parents, Theodore J. and Jean May (Peters) Atzemis; paternal grandparents, James and Emaline (Kuhn) Atzemis; maternal grandparents, Bob and Maryjean (Squire) Lillibridge. A Celebration of Life will be held on Thursday, January 27, 2022 from 5-7pm at Lake Erie Cremation & Funeral Services, 1500 Harpersfield Rd, Geneva, Ohio. www.LakeErieCrematory.com

The family of Robert T. Atzemis created this Life Tributes page to make it easy to share your memories.