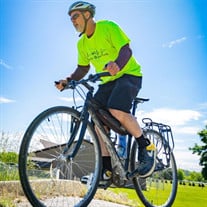 Robert (Bob) Bobik; age 60. Cherished father of Steven (wife Nikki) Siket, Samantha and John (J.T.) Bobik. Beloved son of Donna and Richard (dec'd) Bobik, much loved brother of David (wife Cathy) Bobik and Lori (husband Lyn) Hoffman. Passed away unexpectedly December 28, 2021. A Celebration of Life will be held in the Cleveland MetroParks on a date to be arranged in June of 2022. Donations can be made on behalf of Sam & JT c/o CommStar Credit Union, Robert Bobik Memorial Fund, 832 Cleveland Street, Elyria, Ohio 44035. Bob was a 25-year employee of the Cleveland Public Library in IT. He was also an avid mountain biker, a hobby that started out of necessity. As a result of his passion for riding, he met and rode with various groups throughout the Cleveland and Akron area, creating wonderful friendships along the way. Also an avid music lover, he supported local talent as much as possible, and along with his sister, brother-in-law and a select group of friends, followed Michael Stanley and his respective bands for 25+ years. Above all, as a single father, he was Super Dad – he was beyond proud of his children. Whether it was road trips to go to restaurants featured on Diners, Drive-Ins and Dives, the Columbus Zoo, or cross-country, it didn't matter, it was all about his children. A very special thanks to the Ferry Family as well as the Elmwood Avenue neighborhood.

The family of Robert Bobik created this Life Tributes page to make it easy to share your memories.