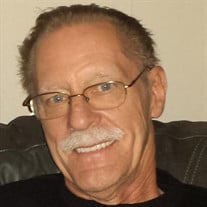 Robert (Bob) Kenny, 76, of Painesville, Ohio, passed away on Tuesday, April 12, 2022 at UH Tripoint Medical Center, surrounded by his family. Bob was born on September 10, 1946 in Miami, Florida to William and Mira McDermott-Kenny. After graduating from Kirtland High School in 1964, Bob joined the military. He was a US Navy Vietnam Veteran where he served on the USS Independence from 1963-1967. Bob was a rescue helicopter pilot during the war and was awarded many ribbons and medals as a result of his selfless acts during the war. After his time in the Us Navy Bob joined the US Navy Reserves and then went on the join the US Army National Guard in Arizona. Bob had a successful career as a machine repairman with Caterpillar, Inc. where he retired after 30 years. He enjoyed motorcycles, fishing, gardening and spending time with his beloved four-legged companion Moose. Bob is survived by his loving children Rhonda (Rick) Tomlinson of Painesville Township and Aaron Kenny of Cleveland; Grandchildren, Jacob (Claire Slak) Leonard of Columbus, Hallie (John) Piscioneri of Mayfield, Kevin Werfield of Middlefield, Olivia Campbell of Middlefield, Alex Campbell of Middlefield and Victoria Mullett of Burton; David Mitchell, his cousin but like the brother he never had, and his lifelong best friend Peter Mayeux. He is preceded in death by his parents; daughter, Heather Kenny-Mullett and sister Ann Kenny. A Celebration of Life will be held on Saturday May 14th, 2022, from 3:00pm-6:00pm at Concord Community Center 7671 Auburn Road, Painesville, Ohio 44077. Lake Erie Cremation and Funeral Services, 1500 Harpersfield Road, Geneva, Ohio (440) 361-2273 assisted the family with arrangements. www.LakeErieCrematory.com

Robert (Bob) Kenny, 76, of Painesville, Ohio, passed away on Tuesday, April 12, 2022 at UH Tripoint Medical Center, surrounded by his family. Bob was born on September 10, 1946 in Miami, Florida to William and Mira McDermott-Kenny. After graduating... View Obituary & Service Information

The family of Robert Kenny created this Life Tributes page to make it easy to share your memories.