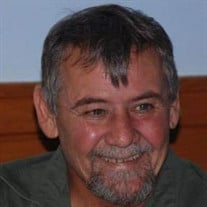 Steven Basic, 67, of Geneva, passed away peacefully at his home on Sunday, April 10, 2022. He was born October 5, 1954 in Cleveland, Ohio to Ardo and Hilda (Sovacic) Basic. On June 25, 1993 he married Margaret A. Ruzich in Euclid, Ohio and together they shared more than 28 years of love and memories. Steven is survived by his wife, Margaret A. (Ruzich) Basic; children, Angela Basic and her husband Jeff Stewart, Rachel Basic and her fiancé Dale Ross; grandson, Owen Stewart; sisters, Frieda Anderson, Lydia Burke. He is also survived by many nieces, nephews, great-nieces, and great-nephews. He was preceded in death by his parents, Ardo and Hilda (Sovacic) Basic; brother Andrew Basic; sisters, Barbara King and Emmy Lou Casper. A Celebration of Life service will be held from 3-5:00pm on Saturday, April 16, 2022 at Lake Erie Cremation and Funeral Services, 1500 Harpersfield Road, Geneva, Ohio with full military honors being performed by the Geneva VFW Post 6846 Color Guard at 3:30pm. In lieu of flowers, contributions can be made to Hospice of the Western Reserve, 1166 Lake Avenue, Ashtabula, Ohio 44004. www.LakeErieCrematory.com

The family of Steven Basic created this Life Tributes page to make it easy to share your memories.

Steven Basic, 67, of Geneva, passed away peacefully at his home...