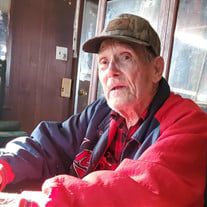 Thomas Matthew Sexton, age 93, of Madison, Ohio, passed away November 1, 2021 at his home surrounded by his loving family. Tom was born on May 21st, 1928, in Drift, Kentucky, to parents Perry Sexton and Ellen (Casebolt) Sexton. He went to school until his family needed him to help by working. Tom plowed the fields and helped raise the animals while his brothers were drafted in the service. A few years later Tom enlisted in the Army and spent time serving in Germany to guard the Berlin Wall. Tom served during the Korean War for 4 years as a Private in the U.S. Army. Following his time in the service, Tom married Mary Roselie (Smith) Sexton in Cleveland, OH., in 1960. Tom was employed by General Motors for 33 years (Euclid, OH.) where he worked on the assembly line. During his time with GM, Tom also became a French Seamstress, sewing seat covers in the cars, and then in his last few years with the company he worked as a custodian. Tom enjoyed going camping, fishing and hunting, and he loved to watch the Cleveland Indians with his grandson Nathan. Tom was also an assistant Scout Master for the Boy Scouts. Mostly, Tom loved growing his paw paw trees and had a passion for nature. Tom was a faithful Protestant and had a strong belief in God. Tom was blessed with a beautiful family and is survived by his son; Timothy Matthew Sexton and his daughter-in-law; Tina ( Goff) Sexton of Madison, his grandchildren; Timothy, Matthew, Nathan, Tiffany, Kristy, and Britney, his great-grandchildren; Aubree, Mason, Haylee, Brevin, Nico, Alyiah, Mary and John, and his siblings; Ivan and Emily. Tom was also blessed with a very good life-long friend; Kenny Glover. He is preceded in death by his loving wife; Mary Roselie (Smith) Sexton in 1991, his parents; Perry and Ellen, his son; Marvin Dale Sexton in 2016, his grandson; Jeremy Taylor Sexton in 2008 and his siblings; Glover, Wheeler, Lee Aronald, Marvin, Arthur, Bernice, Goldie, Susie, and Lou Ellen. The Sexton family welcomes family and friends for calling hours on Sunday, November 7th, from 4pm-6pm at Lake Erie Cremation & Funeral Services, 1500 Harpersfield Rd., Geneva, OH. www.lakeeriecrematory.com, 440-361-2273.

Thomas Matthew Sexton, age 93, of Madison, Ohio, passed away November 1, 2021 at his home surrounded by his loving family. Tom was born on May 21st, 1928, in Drift, Kentucky, to parents Perry Sexton and Ellen (Casebolt) Sexton. He went to... View Obituary & Service Information

The family of Thomas Matthew Sexton created this Life Tributes page to make it easy to share your memories.