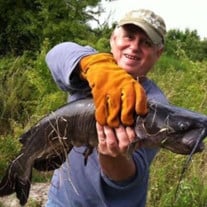 Thomas George Winchell “The Atomic Tom-a-Hawk”, age 71 of Geneva, passed away surrounded by his family on February 2nd, 2021. Tom spent his last weeks at his daughter Wendy’s home where he was able to enjoy an unlimited amount of laughs, jokes, stories and ridiculousness all while surrounded by his loving and hilarious (they came by it naturally) children, 2 liters of Pepsi and cans of spam…in what became an unforgettable 2 week long slumber party. He was born June 9th, 1949 in Painesville, Ohio to parents Norman and Betty Winchell (nee Lett), and graduated from Eastlake North High School in 1968. Tom played football and wrestled, he was very well known for his unprecedented strength on the field and on the mat. Tom was inducted into his high school hall of fame for wrestling in 2017. More than anything, Tom loved spending time with his children and grandchildren. He also enjoyed fishing, rooting for the Indians, Browns, and Buckeyes, and he loved music, especially Elvis Presley. Tom’s Elvis impressions were always on point and inappropriately funny. Tom is survived by his children; Nathan (Kelli Brock) Winchell, Wendy Winchell, Aaron Winchell, Jeremy (Brittany) Winchell, Jonathan Winchell, and Garrett Winchell; his grandchildren; Alyssa, Tyler, Zachary, Noah, Addison, Aaron Jr., Anthony, Emily, Ella, Andrew, Landon, Gavin, Melody, Chloe, Asher, and Mason, and his siblings; Daniel (Janice) Winchell and Michael (Vickie Skutt) Winchell. Tom is also survived by special friends Michaelle (Shelly) Therrien and Mike Waite, who he enjoyed spending time and going on adventures with. He was preceded in death by his Parents; Norman and Betty Winchell. Tom was known for his sense of humor, quick wit and kindness. He was by far, the most loving, caring and compassionate father. He had a very strong bond with all of his children and loved them more than life itself. As the grandchildren came along, Tom’s heart grew bigger and his smile grew wider. Tom was very proud of his family and always made it a point to let them know how much he loved them. At Tom’s request, there will be no calling hours or services. A celebration of Tom’s life will be held at a future date. On behalf of Tom’s family, a special thank you goes to Geauga Hospital, 2 West Unit, his Nurse Melanie, Hospice of the Western Reserve…with special thanks to Curtis, Diane and Laura. Lake Erie Cremation & Funeral Services assisted the family with funeral arrangements, 1500 Harpersfield Rd., Geneva. 440-361-2273, www.lakeeriecrematory.com “Ladies and gentlemen, Elvis has left the building.”

Thomas George Winchell &#8220;The Atomic Tom-a-Hawk&#8221;, age 71 of Geneva, passed away surrounded by his family on February 2nd, 2021. Tom spent his last weeks at his daughter Wendy&#8217;s home where he was able to enjoy an unlimited amount... View Obituary & Service Information

The family of Thomas G. Winchell created this Life Tributes page to make it easy to share your memories.