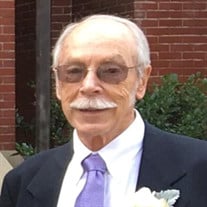 Wilbur B. (Bill) Lehman, age 89, formerly a long-time resident of Roaming Shores, OH passed away early Saturday morning, December 18, 2021 at Life Care Hospice near his home in Wooster, OH. Bill was born February 5, 1932 in Orrville, OH to Gordon W. and Lois D. (Burkholder) Lehman. He graduated from Orrville High School and was a 1958 graduate of the Ohio Northern University School of Pharmacy and a Kappa Psi fraternity member. Bill was also a proud U.S. Army veteran. Bill married Sandra (Sandy) Trogdon on July 6, 1958 in Rittman, OH, and they were blessed to share nearly 63-1/2 loving years as husband and wife and each other’s best friend. They worked side by side and enjoyed many memorable vacations together. In his lifetime, first and foremost, Bill was a devoted son, brother, husband, father, grandfather, and great grandfather. His family always came first, and his great love for his children, Jon and Susan, was returned to him one thousandfold. Bill’s life work as a small-town pharmacist spanned nearly forty years. He worked with his brother Bob at Lehman Pharmacy in Chardon, OH and at Jefferson Pharmacy in Jefferson, OH where he was co-owner with his wife Sandy. He truly enjoyed knowing and serving his customers and their families. During his lifetime, Bill was a member of several professional pharmacy associations. He was a member of Chardon Volunteer Fire Department where he shared not only firefighting duties with his fellow firefighters, but unforgettable fun fishing trips to Canada. Bill was a ham radio enthusiast and was a member of the Ashtabula County Radio Club. He was a member of the Jefferson United Methodist Church where he enjoyed singing in the choir. He enjoyed cycling and was a Western Reserve Greenway Trail volunteer bike patrol member. He had many varied interests tinkering in his garage, bowling, disc golf, snow skiing, sailing with his brother on Lake Erie and in the Virgin Islands, but he most enjoyed boating, waterskiing, and fishing with his children and grandchildren on the lake at Roaming Shores. In addition to his wife, Bill is survived by his beloved children Jonathan and Stacy (King) Lehman of Plano, TX and Susan and Caleb Davenport of Wooster, OH and grandchildren David (fiancée Ciera Terry) Lehman of Austin, TX, Annie Lehman Ray and Irving Ray of Arlington, VA, Thomas Davenport of Brandon, FL, Noah (fiancée Shelby Burckhart) Davenport of Willoughby, OH and Benjamin and Jordan (Smith) Davenport at Ramstein AFB in Frankfort, Germany and sweet, sweet great-granddaughters Allison Quinn Davenport and Eloise Juliette Ray. He is also survived by sister and brother-in-law Nancy and Richard King, Wooster and sister-in-law Patricia King, Smithville as well as nieces and nephews, Jeff and Linda Lehman, Kristin Lehman and Stephen Ubri, Kathy King Yoder, Rick King and Mary Kay Stephenson, Beth and Ron Fuller, Lee and Michelle King and dear Lehman, Burkholder, and Stewart cousins. Bill was preceded in death by his parents, in-laws Leo and Geneva Trogdon, brother and sister-in-law Bob and Sally Lehman and brother-in-law Gary King. Honoring Bill’s wishes there will be a private inurnment committal service for the family at East Chippewa Church of the Brethren cemetery in Orrville, OH. Those wishing to share a memory or on-line condolence may do so at www.lakeeriecrematory.com. The family will welcome and appreciate your sharing memories of Bill with them. The family's hearts are filled with gratitude for the compassionate care given to Bill by each and every employee of Life Care Hospice. If so desired, memorial gifts may be sent to Life Care Hospice 1900 Akron Rd. Wooster, OH 44691.

The family of Wilbur B. "Bill" Lehman created this Life Tributes page to make it easy to share your memories.