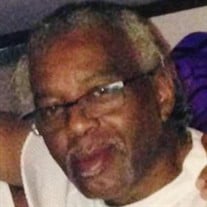 William Dale Chatman-Holmes (Popo), age 65 of Gahanna, Ohio passed away peacefully at his home on October 30th, 2020 after a lengthy illness. Born August 4th, 1955 to the late Laurine (Wells) Chatman and William D. Chatman. William graduated from Ashtabula High School in 1973 and enlisted in the U.S. Air Force, and was honorably discharged in 1975. He was employed at MFG in Ashtabula for numerous years where he retired. William enjoyed playing pool, bowling, hanging out with friends and family and he was an avid Ohio sports fan. He was a member of the Ashtabula V.F.W., the American Legion and the A.N.U. William is survived by his children; Antonio G. Young (Stacy Holcomb) of Ashtabula, Mandrell T. Young (Vicki Travis) of Gahanna, Devin (Kim) Jaskela of Ashtabula, Siobhan Jaskela of Gahanna, Elizabeth Kelly (Chatman) of Jefferson, Cindy Enos of Ashtabula, Kathy Jeffrey of Erie, PA, and Michelle (Seth) White of Cleveland. He is also survived by 27 grandchildren and 19 great-grandchildren. William is also survived by Joyce Jaskela of Gahanna, Sandra Bowersox of Erie, PA, and the late Karen Young of Ashtabula, all loving mothers to his children. William is survived by 14 siblings, and he is preceded in death by his mother Laurine (Wells) Chatman and his fathers’ William D. Chatman and Grandpa Holmes and his brother Ronnie Chatman. A private Celebration of Life will take place at a future date for the family. Lake Erie Cremation & Funeral Services assisted the family with arrangements, 1500 Harpersfield Rd., Geneva. 440-361-2273.

The family of William Dale Holmes created this Life Tributes page to make it easy to share your memories.